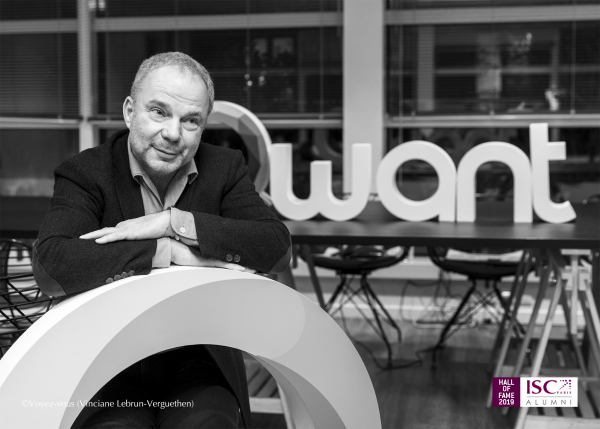 Each year, the "Hall of Fame" ISC Paris Alumni highlights Alumni with remarkable careers, rich personalities, reflecting the talents of our 18,000 ISC Paris Alumni ! All of them have kept precious memories of their time at the ISC Paris and have at heart, each in their own way, to send a strong message through their testimonies to the Alumni and students.

Discover the testimony of Jean-Manuel Rozan, Co-founder of Qwant and winner of the Hall of Fame 2019

Jean-Manuel works on intuition. When Eric Léandri talks about the need to offer an alternative to Google, the absolute leader in its market, he follows in his footsteps, convinced that we can prosper on a promise: respect users' privacy.

Did you know that in the United States, the NSA has access to the servers of companies such as Google and therefore to all the personal data you provide when using their services?

When Jean-Manuel and Éric present their project in 2013 to the Ministry of Productive Recovery, the counsellor who receives them believes them to be joking! "At that time, no one was aware of what was happening with the Internet."

In 2010, Jean-Manuel met Éric, initially just to provide him with funds. " Then he explained to me what the Internet was becoming and the need to offer an alternative, so I followed him." Together, they are launching the "world's largest market, the search market" by launching the first search engine that does not collect the personal data of its users, now available in 25 languages in 42 countries. "We're not interested in who they are, we're interested in what they're looking for. Our universe of products and services is based on trust."

The increase in Qwant's traffic is exponential with 115 million requests in November 2018! Since the beginning, traffic has increased by 10 to 20% per month.

The National Assembly, the Ile-de-France and PACA regions, the city of Paris but also the giant Thalès, all abandoned Google for Qwant.

Jean-Manuel has always been part of his time, often a little ahead of his time. "I'm pretty good at feeling what's coming, seeing the next move coming." Proof of his sense of timing: he started trading in New York in the 1980s, invested in emerging markets in the 1990s, in the Internet in 2000 and finally in privacy in the 2010 "The next big thing".

Intuition is a mixture of intelligence, knowledge and memory. We all have varying degrees of it. Life is a rebus that you have to decipher: it gives you signs, clues, places people in your way. You have to listen to everything and still follow your own idea.

And he adds, "I've always tried to do only things that entertained or excited me." It's his advice to students: "Believe in it, believe in yourself and believe in what you're doing."

Even if he acknowledges that the times are anxious, there are a thousand opportunities that did not exist before. The list of attractiveness centres is constantly growing, in France and around the world, and the professions of tomorrow are to be invented. "The world is full of cash, there's money for everything, funds for all good ideas." And he adds to conclude:

Yesterday's technology solved the problems of the day before yesterday, and created those of today which in turn will be solved by tomorrow's technology!

Since 2013: Co-founder and member of the Board - Qwant

His motto: "Choosing is giving up" The great difficulty of life is knowing when to hold on and when to let go. It's a matter of intuition again.

The character he doesn't like in people: Pessimism, jealousy, cheapness... everything narrow.

In the 1970s, our preparatory math teacher, Claude Riahi, announced that he was joining the Board of Directors of a small, little-known school, in which he also taught at the ISC Paris. We all followed him enthusiastically. We had the feeling that we were part of the birth of something and that was the case! When I see the success of the School and its graduates today, I think that with my friends, we were right to listen to our intuition!

Find inspiring testimonials from all the winners of the 2019 Hall of Fame:

Watch video extracts of their interviews: