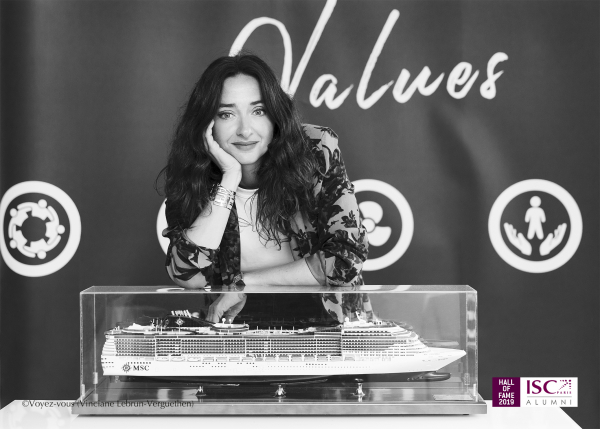 Every year, the "Hall of Fame" ISC Paris Alumni highlights Alumni with remarkable careers, rich personalities, reflecting the talents of our 18,000 Alumni from the ISC Paris ! All of them have kept precious memories of their time at the ISC Paris and have at heart, each in their own way, to send a strong message through their testimonies to the Alumni and the students who will become them. (For our English speaking Alumni, see translation below)

Discover the testimony of Christelle ZUCCHELLI, Communication and Press Relations Manager of MSC Croisières and winner of the Hall of Fame 2019

To her friends who envy her aboard floating palaces, Christelle reminds them with a smile that in 7 days at sea, she can cover 150 km from one end of the ship to the other. With the enthusiasm and communicative energy that characterize her.

On the deck of a sumptuous cruise ship, Christelle sometimes thinks of the journey she has made since her childhood in Marseille, she who already dreamed of a career in the world of luxury. In charge of communication and press relations for the French branch of the world's largest private cruise company, MSC Croisières, she has managed to combine her two passions: travel and high-end services.

For 3 years now, her mission has been to promote the company's image and increase its notoriety in France, in a context of rapid development.

With 70 countries and 23,500 employees on board and ashore, MSC Croisières has embarked on a €13.6 billion investment plan, unprecedented in this industry, planning to double its fleet by 2027 and building the majority of its vessels in France!

It is Christelle's challenge to support and intensify the impact of this development on the French market.

In direct contact with the General Manager France, Christelle orchestrates communication around these future projects. Guarantor of the company's image, she imagines and directs events with a masterful hand and carries out strategic press relations work. She is called upon to work on the Executive Director's speeches based on the strategy and values of MSC Croisières. As a guarantor of the company's image, one of its main missions is also to monitor the comments made to the company in order to anticipate and avoid possible threats or to work on story telling; it can sometimes be at the very heart of the crisis management system.

His job also gives him unforgettable experiences such as the visit of the President of the Republic Emmanuel Macron in June 2017 to the Atlantic construction sites in Saint-Nazaire. Also close to the "field", she goes to sea on board ships to manage and supervise major projects, television shoots or milestone events in the company's history. A task that requires tact and firmness, but also a lot of energy, creativity and rigour.

Christelle's desire to bring together, carry out the adventures and make them come true comes from the ISC Paris and her experience in the Arts Office. She led the "Night of the 6 Arts" project there in the early 2000s. She draws a precept from it:

To be fulfilled, you have to choose a professional universe that corresponds to who you are. This may take time, but you shouldn't go against your own nature.

Her choice has taken her far, across the oceans and will continue to carry her for a long time to come.

2013: Head of the official representative office of the Qatar Tourism Authority in France

The job she wasn't made for: IT. The human being, the meeting, the fact of going towards others is important to me

Her favorite word: enthusiasm. I am a fundamentally positive, spontaneous and voluntary person

His favourite landscape: the blazing sunset of the Bloody Islands, in Corsica

During my Master's degree in Marketing and Management of Luxury Industries at the ISC Paris we had a subject called "tourism". Before taking these courses, luxury was for me limited to the major jewellery, Haute Couture or watchmaking companies. In reality, the School has opened up new horizons for me that I never suspected and allowed me to find my way.

Find inspiring testimonials from all the winners of the 2019 Hall of Fame:

Watch video extracts of their interviews: